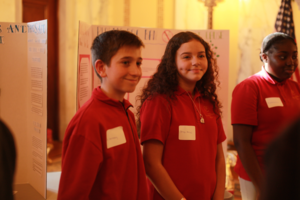 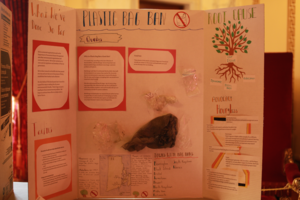 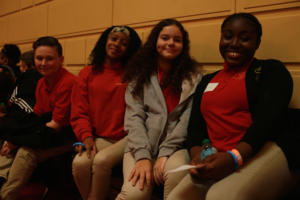 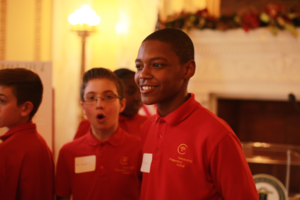 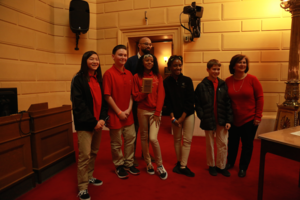 Seventh grade social studies classes take 1st and 2nd place, during Civics Day at R.I. Statehouse.
As citizens in a democracy, we must know how to move toward agreement together.
Those were the words of Ashley, who recounted how she and fellow seventh graders worked out opinions and arguments to present action projects on local issues during Civics Day at the Rhode Island Statehouse last December.
Community Prep was one of 43 middle and high schools to make “youth-led-change” presentations graded on the criteria of: Grassroots Change, Systemic Impact, Collaboration and Diversity, Action, and Open-Mindedness.
For their presentation entitled, “Firearm Carry Permits and the Safe Schools Act,” the students received the Middle School Changemaker Award, for best overall middle-school project. Generation Citizen (GC) sponsors Civics Day. GC is a nationwide program to “empower young people to become engaged and effective citizens.”
Rhode Island is one of only four states to allow a concealed carry permit holder to bring a gun onto the grounds of a K-12 school.
Using a tree—roots-trunk-crown-foliage—to symbolize the systemic nature of gun culture and gun violence, the students argued that except for law enforcement, guns should stay out of local schools.
Gun violence affects almost everyone today, said Nate. “A young person who is shot and killed will never go to college, have a wedding, or send their own children to school. What does that say about us as a society?” asked William.
What helped the students express their position, said Anya, was that “we included and addressed points of view from other sides, such as teachers carrying guns.”
For each point introduced by the students, “such as ‘good guy with a gun,’ we debunked it and learned more along the way,” added Ashley.
This was the second year that Community Prep’s seventh-grade classes participated in GC’s democracy curriculum, culminating in the Civics Day event.
“Through the civics curriculum, students learn about democratic institutions and roles, responsibilities and opportunities in their communities,” said Miriam Hwang-Carlos, the GC program associate who worked with the seventh graders.
Rhode Island does not require its schools to offer civics or government courses, and it does not train teachers in civics.
Cauley Greene, who teaches English and Social Studies at Community Prep, used the GC curriculum in each of the school’s seventh-grade classes.
“I think it’s important to exercise our civic muscles as much as we can and as early as we can, and a program like this might be a critical piece of a young citizen’s understanding of their roles and responsibility in our democracy,” he said.
“Students this age love to debate and argue, and talking about and grappling with real-world issues is at once exciting and overwhelming for them. The choice process was a good experience at compromise and consensus, which are things I try to focus on over the course of the year. I frequently remind them that no one should walk away from a compromise completely happy.”
In Greene’s classroom, students “are respected and respect each other,” said Hwang-Carlos. That is a model for helping students “learn the process of creating a plan to tackle a problem. It’s easy to get stuck on a problem and to disagree on the process to see your way forward.”

While one class focused on gun permits and school safety, the other chose to examine plastic-bag pollution, eventually calling for a ban on single-use bags.
Plastic pollution was easier for us to focus on, said Ari. “We see how plastic hurts the environment.” Ian agreed. “Just look at the YouTube video of the sea turtle with a plastic star stuck up its nostril,” he said.
The plastic-bag pollution action project took second place behind the firearms presentation among middle schools participating in Civics Day.
Students in each Community Prep class chose smaller groups to move the process along, including group leaders. Among its actions, a team compiled research, interviewed community members, communicated with legislators, prepared standalone posters, and verbally explained their projects to the Civics Day audience of legislators, community leaders, volunteers, peers and others.
Gun violence was “a far broader subject than we first realized,” said Leila. “But we knew students who were shot. We knew parents who were shot. This was about our getting a voice. We believed that youth could have a voice about violence.”
We debated a lot before focusing on the issue, said Mick. “It was valuable for us to go through all of that and to stick with it.”
Besides gaining an understanding of how government worked, the students “learned about compromise, and the value of working as small groups for a larger collaborative project,” said Greene. “I also think many of the kids probably have a better understanding about the basic ways our government works, or at least how laws can be made and altered.”
For the students, an eye-opening moment occurred during their calls to legislators to discuss firearms and safe schools. “We were not taken seriously,” said Anya, "and that was because we were seventh graders. But we cannot let that experience get in the way of an issue that we push for. Don’t judge us because we are youth. Judge us on our message.”
The United States is not perfect, said Ashley. “It has its ups and downs. But it is a country in which we follow rules and we have the freedom to say what we think. We also learned that we need better ways to deal with issues, and that we must talk with the other sides on an issue. It’s about communication.”
For some students, the idea of civic action is quite remote, said Greene. “And perhaps that’s understandable, given we essentially shut young people out of politics until they’re ready to vote. But for many of them this experience was exciting and empowering.”
When we work through our differences, we come out with a direction,” said Rose. “Adults may help us, but we’ve got to do the work.”
Anya agreed: “When we all come together, we can do something nicely.”
Print