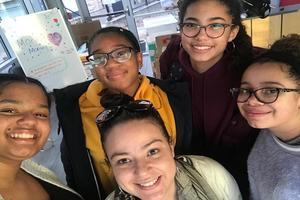 “In many environments you put on a mask, but I felt like there wasn’t anything to hold back,” said Anya, discussing her participation in a “multi-racial” affinity group in which she identified. “I won’t forget seeing that many bi-racial people with similar experiences in one place.”

Irene, whose parents came from Africa, met and interacted with multiple 13- and 14-year-old Africans and African Americans at the conference. “I felt self appreciation. It was empowering.”

The meeting was entitled “Living and Finessing in Color,” and featured a tagline, “Before we start understanding other people, we need to do that to ourselves. And we do that through reflection and introspection and seeing where our biases lie.”

Eighth grade is early adolescence, an often-intense transition time from middle to high school. Typically, much is happening in the lives and minds of eighth graders.

“Whatever situation someone is possibly going through, it seemed like the conference could help,” said Christian. “I felt welcomed.”

“The conference provided an opportunity for students that aligns with our school's mission," said Principal Anita Bench. “At Community Prep, we understand diversity makes us stronger, and we also strive to help students build their leadership potential."

For cultural, family and other reasons, people often have multiple middle and/or last names. That was one reason why Raye said she was thankful for the “What's in a Name?” workshop, “as someone with four middle names and two last names,” she said.

In addition, Raye pointed out that lunch featured open seating, which she found both welcoming and unusual. “I came to CP from a predominately white school, where I would not have felt comfortable just sitting down to eat with random strangers.”

Kiara concurred. “Even in a small community, you can feel unconscious bias such as ‘oh those poor people of color.’ People of color led the conference sessions. Lunch was a chance to connect with other students of color. I felt like myself.”

For Koko, who like Irene and Gloria, comes from an African household, the entire conference was a chance to chat “normally” about foods they eat at home. “I felt I could talk freely.”

The conference also enabled students to listen to and better understand peers who identified differently than them. “I learned from those who identified as Latinx and was made more aware of its meaning and perspectives,” said Gloria.

Irene noted that the dance workshop she attended—along with Anaya, Gloria and Koko—was a chance to learn about different cultures, as well as her own.

“Yes, culture can divide us, but it doesn’t have to,” said Anaya. “It is natural to wonder where you are from and how you fit in, but you also want to learn about others. I am curious about different cultures. That’s why I was inspired by this conference.”

Added Koko, “Yes you are different, but you also find out that you’re sharing some of the same kinds of struggles. Through sharing and listening, you discover that we are all very similar.”

Because 8th graders who attended the conference had such a positive experience, the school now plans to send a cohort of students every year, said Bench.

“This annual conference will become something our younger students look forward to experiencing before they graduate,” she said.