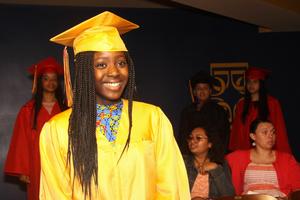 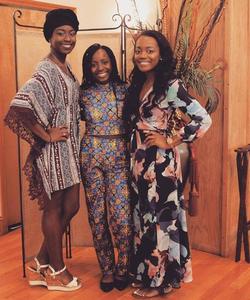 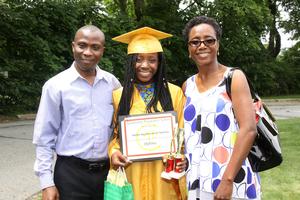 Meet Victoria, Christine and Sophia-Joy Agbelese--three sisters and three alums, who share the special place that CP holds in their hearts.

In a household where both parents earned PhD’s, Mofoluso Agbelese said the power of education was a cornerstone of her childhood family life.

As an adult, Agbelese and her husband, Titus, shared a passion for education. That explains why when their three children-- Victoria, Christine and Sophia-Joy—were little, “we would visit libraries around the state for fun,” said Agbelese.

Indeed it was in a South Providence library that Agbelese learned about summer programming at Community Prep (CP) meant to prepare students academically for their next grade levels.

At the time, Victoria and Christine were almost through an elementary school that met their social and emotional needs but did not necessarily “challenge them” academically, Agbelese said.

When she visited Community Prep, Agbelese found a school with a nearly 100-percent acceptance rate into college-preparatory high school programs.

She also discovered a generous financial aid policy to help ensure that no student who belonged at Community Prep would face cost as a barrier.

The family applied, and Victoria was accepted into the 7th grade and Christine into the 6th grade. Both received scholarships to attend.

Although her time at Community Prep was short, the school “will always hold a special place in my heart,” said Victoria.

“Community Prep challenges its students to grow inside and outside the classroom,” she said. “Our teachers not only taught us geometry, physics, history, and language arts, but also life lessons. They taught us the importance of pushing through tough times, teamwork, and trying our best. These lessons not only impacted our experience at CP, but also as we transitioned to high school and beyond.”

After moving on from Community Prep, Victoria attended and graduated from Lincoln School. Then, after four years at Boston University, she entered Yale University, where she plans to graduate this spring with a master’s degree in public health.

“CP was such an integral and important part of my life, because it showed me that people, who are from diverse backgrounds, could achieve things, which the rest of the world repeatedly tells us to believe is impossible,” said Christine.

“I will always be grateful to CP because it was at CP that I was surrounded by people who were simultaneously the same as me (in that I could look around and see myself in my classmates), while also being very different from me (as everyone came from different backgrounds and had different stories of their own).”

As for Sophia-Joy, she joined Community Prep in third grade (the school eventually dropped third grade, and is now a 4-8 school).

Sophia-Joy “went through Community Prep, involved in everything from golf to film to piano,” said Agbelese. Graduating from Community Prep as valedictorian, Sophia-Joy is currently in 10th grade at Lincoln School.

Community Prep is indeed “really a community,” said Sophia-Joy. “Teachers genuinely care about their students and even go as far as spending weekends helping students with work. They not only are adults who care about us but they become our mentors. Even after graduating, students constantly go back to visit their teachers, as well as the staff and students.”

For Christine, scholarship funding in high school included travel for education. She spent one summer at Oxford University in studies that helped lead her to eventually attend law school. Sophia-Joy has received similar funding, and is currently planning her travel.

Victoria and Christine also earned academic scholarships to cover their undergraduate educations. “It was at CP that I learned that I was not only skilled in math but also writing, which can be traced to my undergraduate degree,” said Christine. “CP will always have a place in my heart, and I can attribute so much of who I am today - almost a decade later - to it.”

Agbelese said her daughters left Community Prep as boosters. In fact, the children of several other families ended up attending the school based on the good things her daughters said about it.

A decade after graduation, Victoria remains “very appreciative of all of the amazing people” she met at Community Prep.

“Although this year marks ten years since I graduated CP, my class still manages to have a reunion each year, and it is something I look forward to. Together we have celebrated birthdays, engagements, weddings, parenthood, graduations, and more. I am thankful for all the friends I've made and all the memories we have shared.”

Community Prep was “genuinely interested in our children,” said Agbelese. “It was an academically challenging school in a caring environment.”